Italy is a gem of a country, rich in both culture and natural beauty, and its breathtaking islands represent much of its charm. From glamorous resorts and distinguished culture to magnificent historic cities, dramatic volcanoes, and pure-white secluded beaches, there’s absolutely nothing you can’t find off the dazzling Italian shores. Famous for harboring Napoleon during his exile in 1814, Elba is the largest and most popular island in the Tuscan Archipelago, and an ideal destination for those looking to enjoy a delightful beach retreat away from the bustling city life. Don’t expect too much relaxation, though. With its abundance of beautiful sandy beaches, sparkling blue waters, and picturesque wooded mountains, Elba offers a variety of activities, keeping visitors entertained from dusk till dawn.

The gorgeous Tuscan Archipelago is the largest protected marine park in Europe, so it’s no surprise that its underwater universe affords some spectacular diving and snorkeling. Other popular activities on the island of Elba include mountain biking, climbing, and windsurfing. Featuring a surprisingly delicious combination of maritime and Tuscan traditions, the local cuisine is certainly not to be missed. 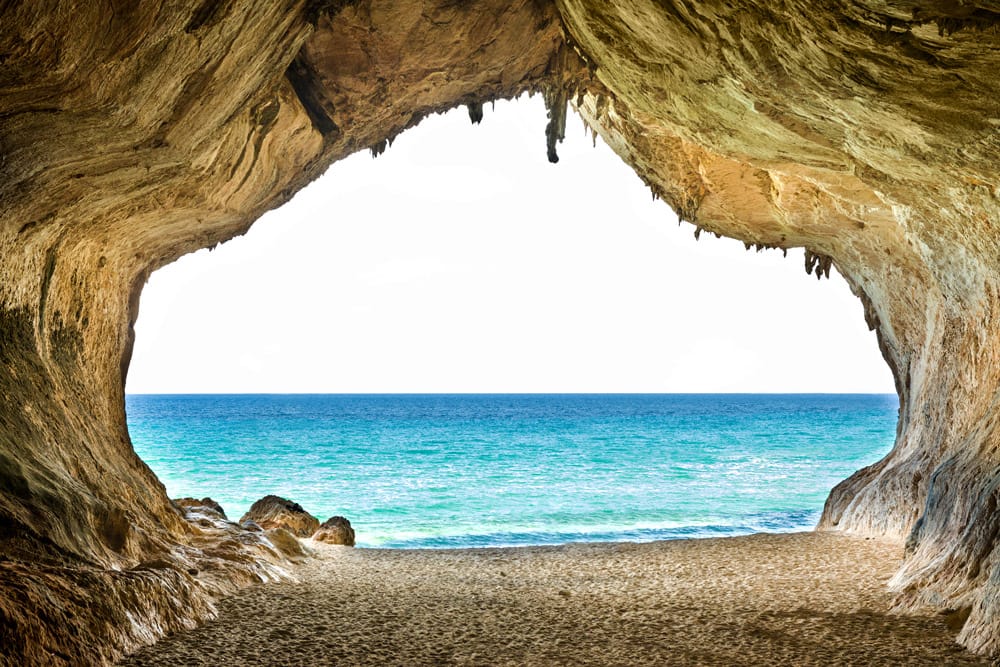 Varied, vibrant, and utterly beautiful, the second largest island in the Med, with its quintessential Mediterranean charm, heavenly food, and rich, distinguished culture, is a feast of an island, and certainly one of Italy’s most seductive destinations.

From the A-list glamour of Costa Smeralda to the roman ruins and medieval lure of its lesser-known towns, Sardinia offers everything you would expect from one of the world’s most sophisticated islands – sensational beaches, translucent turquoise seas, and a strong identity that seems neither Italian, nor African, but rather a superb combination of the two, or maybe nothing related.

Considering the country’s great diversity it’s a little unfair to make a Top 10 Sardinian places worth visiting, but here are some suggestions: Gola di Gorropu – the largest canyon in Europe; the archaeological site of Tharros; the spectacular Costa Verde and the Dunes of Piscinas; the enchanting town of Alghero with its lovely Catalan flair; the cities of Oristano and Cagliari; or the stunning La Pelosa Beach. 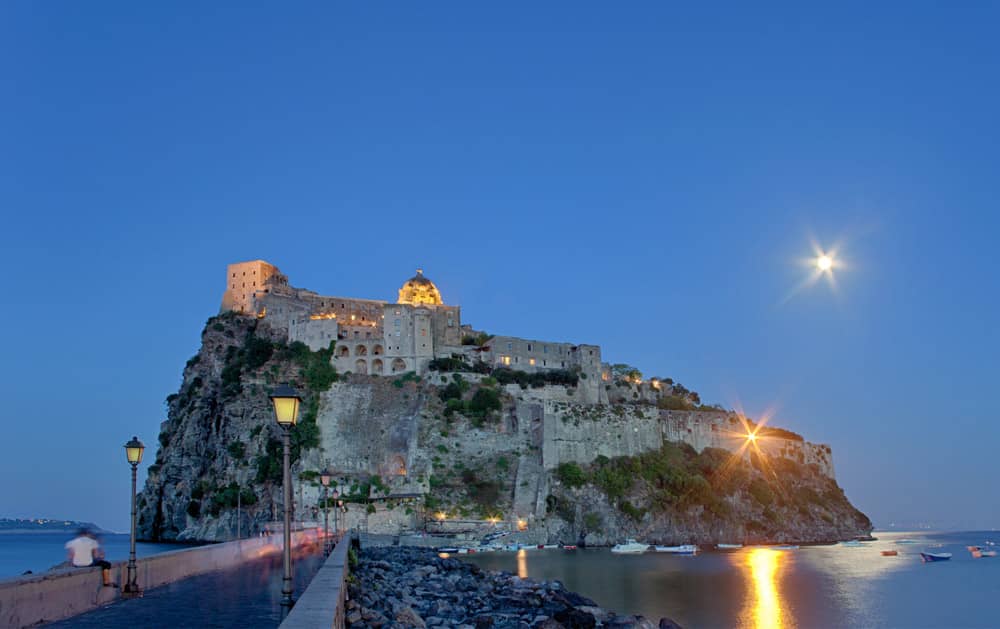 Widely famous for its beautiful landscapes and natural thermal springs, the volcanic island of Ischia lies in the Gulf of Naples, enclosed by the incredibly blue waters of the Tyrrhenian Sea.

Ischia is also the name of the island’s main city, which is divided in two different sides: the charming, old-fashioned Ischia Ponte with its towering Aragonese Castle, and Ischia Porto – the modern center, dotted with numerous bars, restaurants, and elegant boutiques.

Equally appealing, the town of Forio and its picturesque surroundings make for a great base for Ischia’s visitors, offering everything from shopping and nightlife to wonderful beaches, fine dining, and plenty of sightseeing. Other must-see places include the Poseidon Gardens in the bay of Citara, the mesmerizing fishing village of Sant’Angelo, and the stunning public villas and landscaped gardens dotted along the island’s postcard-perfect shores. 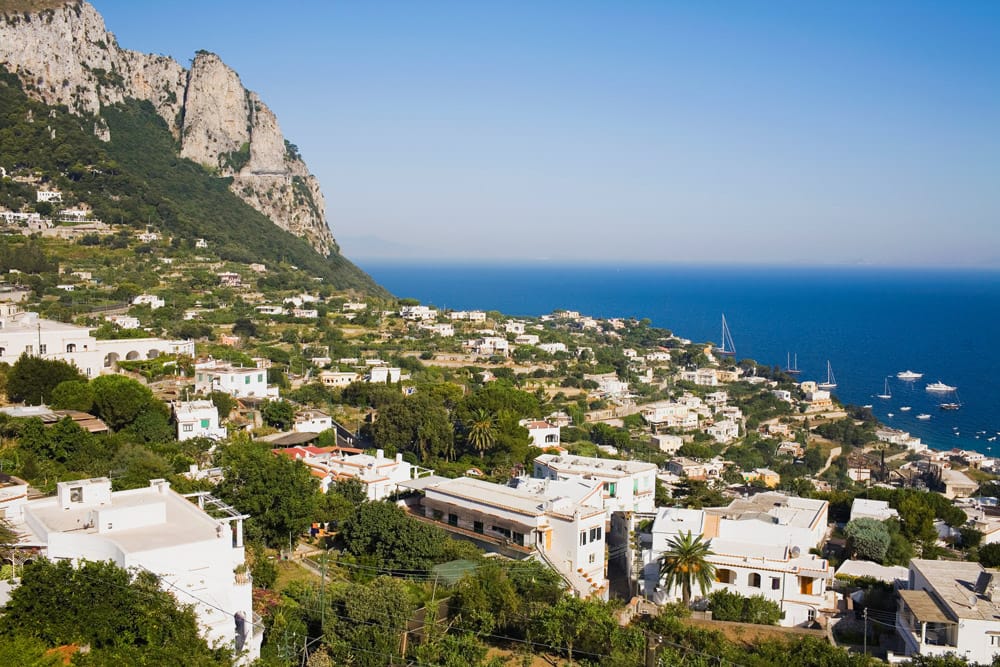 It lies in the Bay of Naples as Italy’s most glamorous island getaway, but despite its reputation of being a summer playground for the rich and famous, Capri overflows with culture and natural beauty.

In addition to its lovely cities – Capri and Anacapri, the island’s top attraction is undoubtedly the spectacular Blue Grotto (Grotta Azzurra), one of the world’s most beautiful sea caves and the only one featuring such a wonderful turquoise color.

The chic town of Capri greets visitors with a delightful maze of narrow streets lined with high-end fashion boutiques and elegant restaurants. In the center of it all, the charming Piazza Umberto I, also known as La Piazzetta, is brimming with life day and night.

Beautifully located at the foot of Mount Solaro, Anacapri is a more tranquil alternative to the energy of celebrity-studded Capri. The beautiful beach and unusual rock formations of Faraglioni are a must-visit spot and one that you won’t forget too soon. Surrounded by three seas and gifted with a remarkable architecture that reflects centuries of foreign domination, Sicily is the largest island in the Mediterranean Sea and arguably the most complex and beautiful in the entire Europe. Mountains, beaches, national parks, and ancient villages complement its natural charm, while the delightful cuisine captivates the world with its distinguished aromas and flavors.

Sicily’s most appealing destinations include the vibrant, Arabian-flavored city of Palermo; elegant Catania; the historic city of Syracuse; the Valley of the Temples – a remarkable archaeological park outside Agrigento; the charming Taormina; and the mighty Mt Etna – the highest volcano in Europe. 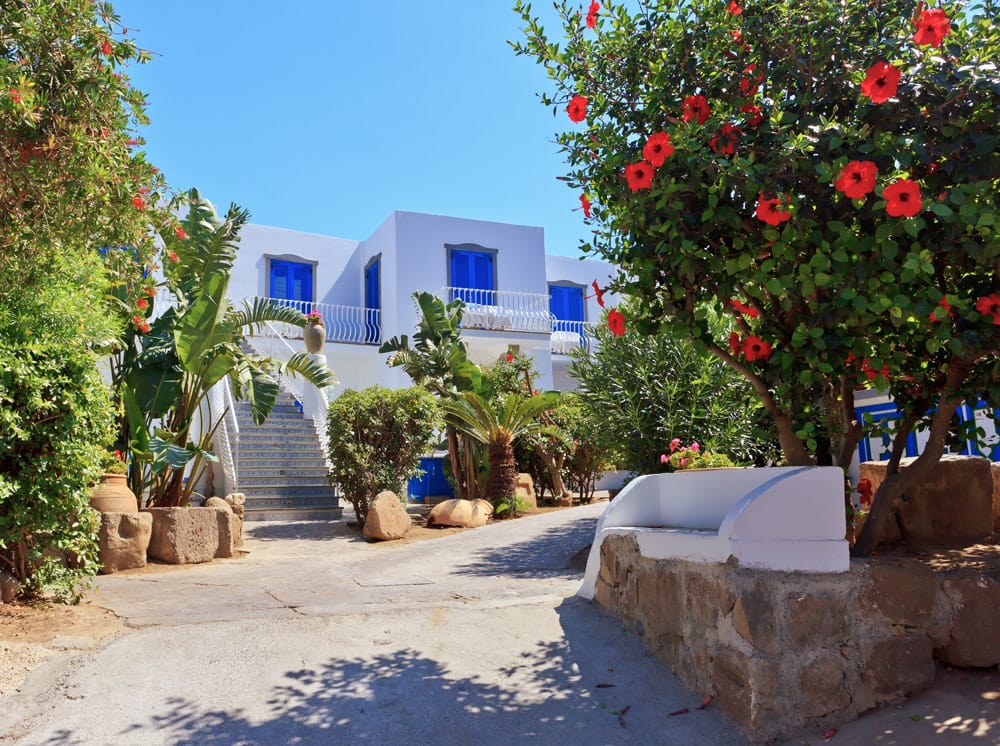 Panarea is a tiny, yet very exclusive island in the Aeolian archipelago, just off the north coast of Sicily. Deprived of traffic and major developments, the island has become a favorite refuge among Europe’s most notable jet-setters, including the Bulgari family, whose summer retreat lies quietly on one of Panarea’s cobblestone footpaths.

Beaches are few, but the spectacular scenery along with the picturesque lanes and whitewashed houses, make it a gem of an island, a gorgeous blend of cosmopolitan sophistication and barefoot island chic. 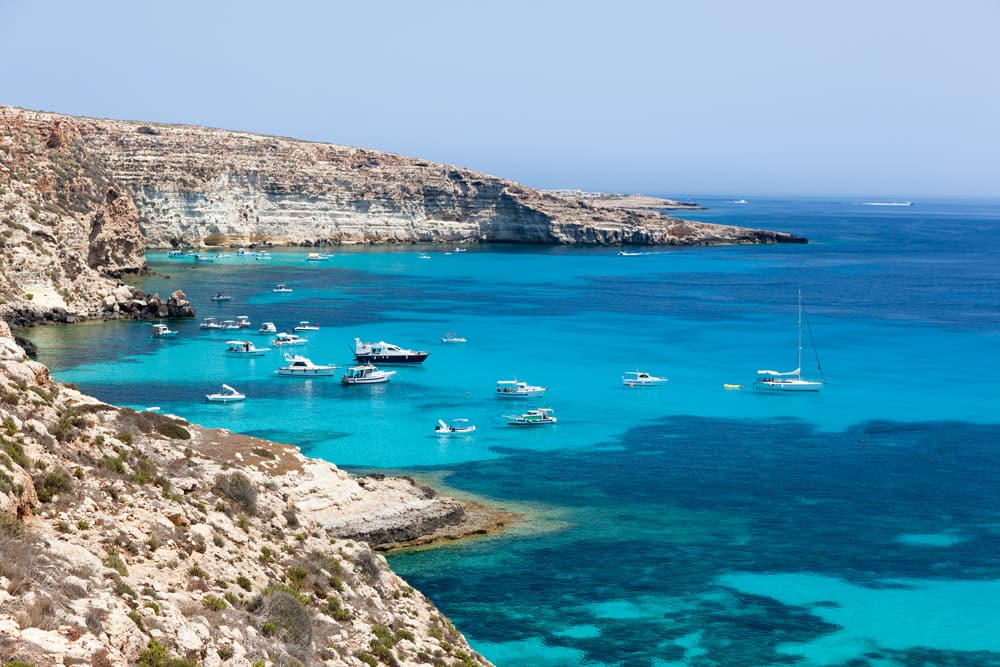 The largest of the Pelagie Islands, Lampedusa lies in the Mediterranean Sea as a magical enclave of stunning white beaches, crystal-clear sea, and wild landscapes. Its beautiful coastline features a spectacular mix of rocks, sheer cliffs, small bays, and remote stretches of powdery sands – all lapped by gorgeous azure waters.

The most magnificent beach in Lampedusa is Spiaggia dei Conigli, which, together with its surrounding area, has been declared a nature reserve.

The island’s only town, also named Lampedusa, is endowed with a pretty port and a lively palm-lined street (Via Roma), where you can find a nice selection of shops, restaurants, and cafes. Overall, this little piece of Africa in the middle of the Med is a wonderful destination for lovers of the sea, offering balmy weather, stunning beaches, and some excellent snorkeling and scuba diving opportunities. 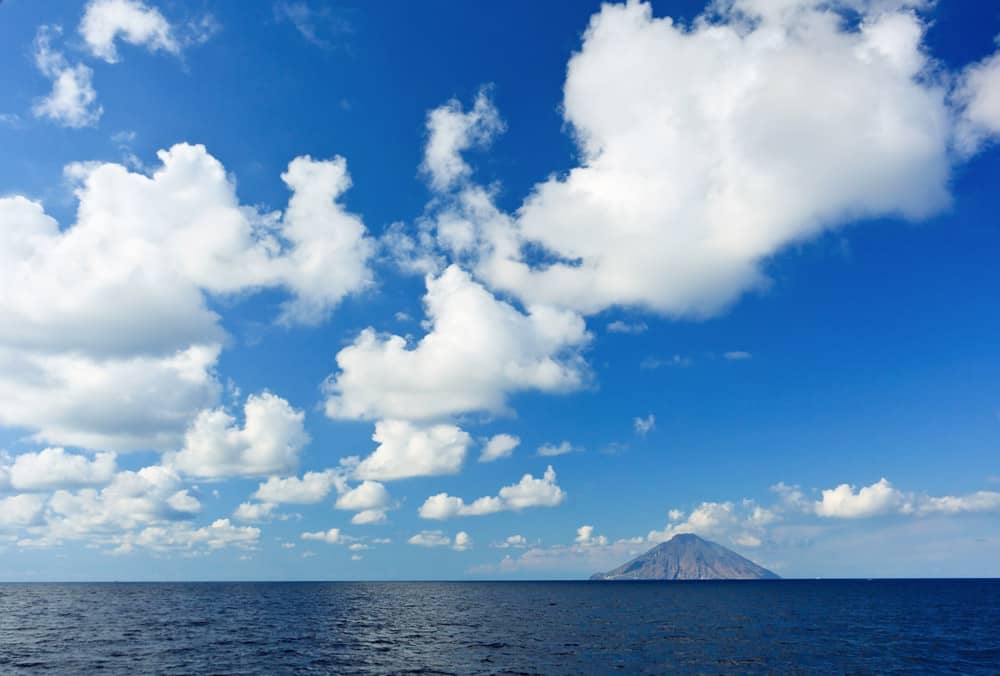 Home to one of Italy’s three active volcanoes, Stromboli is part of the Aeolian Islands and lies in the cobalt waters of the Tyrrhenian Sea, in the north of Sicily.

Thanks to its small size and the lack of tourism, Stromboli is a wonderful destination for those who like to go off the beaten path. It only has a couple of beaches, two quaint villages (Stromboli and Ginostra) peppered with whitewashed homes, and a dramatic volcano that many venture to climb up, although the experience can be quite dangerous.

Other attractions include Stromboli’s black lava beach, where you can swim and soak up the sun; the nearby island of Strombolicchio, which is a real paradise for scuba divers; and the port of Ginostra, considered the smallest port in Europe. The tiniest island in the Gulf of Naples, Procida is brimming with scenic ancient harbors, pastel-hued houses, and lovely pristine beaches. It is a quieter, more authentic alternative to the better known Ischia and Capri nearby, and a great place to combine seaside relaxation with culture and unspoilt rural charm.

Due to its idyllic ambience, Procida has served as the setting for a number of films, including “The Talented Mr. Ripley” and the Oscar-winning “Il Postino” (The Postman).

Some of the most interesting spots on the island are Marina di Corricella – a charming, colorful fishing harbor lined with bars and restaurants; the livelier, yacht-studded Marina di Chiaiolella; the medieval old town of Terra Murata, which is also the highest point of the island and its cultural heart; as well as the peaceful beaches and small hidden bays dotted along the coast of Procida. 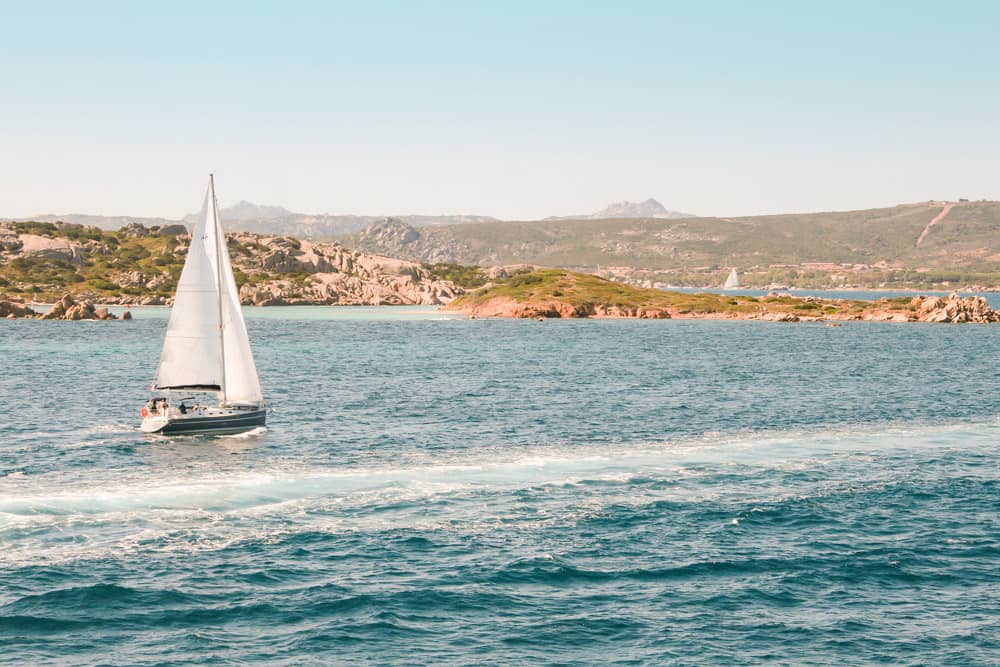 Conveniently located off the northeastern coast of Sardinia, Parco Nazionale dell’Arcipelago di La Maddalena consists of 7 spectacular islands, from which La Maddalena is the largest and most appealing.

People usually come here for the breathtaking beaches (some of Italy’s best) and shimmering waters that remind of the Caribbean shores, but there’s much more to see and do on the island of La Maddalena.

Previous
What To Visit In Normandy, France

Next
10 Most Attractive European Squares